Voice of the Lakota Nation 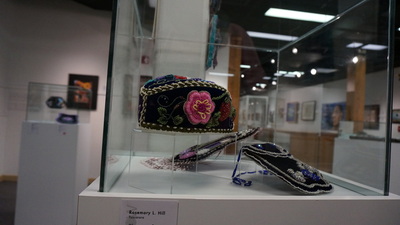 On the Pine Ridge Reservation - the Red Cloud Art show is open every day until the end of August.
KILI Radio is an independent, Lakota owned and operated, 100,000 watt FM radio station located at Porcupine Butte on the Pine Ridge Reservation in southwestern South Dakota. On the air 20 hours a day, seven days a week, KILI’s broadcast area covers 30,000 square miles and includes the Pine Ridge, Cheyenne River and Rosebud Reservations, Rapid City, the southern Black Hills and the panhandle of Nebraska. KILI’s programming includes news and information, public affairs broadcasting, cultural celebration and entertainment with a variety of music formats including traditional, Indian contemporary, country, rock and roll, rap, blues and jazz. KILI is a very unique community radio station working hard to meet the needs of individuals and groups throughout the listening area.


KILI RADIO (90.1 FM), licensed to Porcupine, South Dakota,  is a non-profit radio station broadcasting to the Lakota people on the Pine Ridge, Cheyenne River, and Rosebud Indian Reservations, part of the Great Sioux Nation & a translator in Rapid City, South Dakota (88.7 FM). The station started broadcasting in February 25, 1983 as the first American Indian-owned radio station in the United States.

Owned and operated by Lakota Communications, KILI serves 30,000 people on the three reservations, along with the large American Indian urban community in Rapid City(68,000 Population), using a translator in the Mount Rushmore State's second-largest city.  It seeks to preserve Native American culture and instill pride in the peoples' unique heritage.

For over 30 yrs, we have presented council meetings, health information, basketball games (and many other sporting events) wakes, congressional hearings, and a daily mix of information and music.  KILI is one of the most trans-formative institutions on the reservation.  Since KILI started broadcasting, people have had a chance to actually hear what the various candidates.

We've been in documetaries, magazine articles, and have over 106k followers on Facebook.  We are the "Voice of the Lakota Nation".  Thanks so much for listening to our station . pilamayayelo (thank you)